“Put Baxter in bed now!”, Tyler demanded. Chills ran up my spine, goose-bumps rose on my arms and tears pricked my eyes. With a weak smile indicating he was feeling the same, Tyler’s Facilitator, Ray Davis, got Baxter the dog settled in his bed. We shared a smile and thumbs up as Ray followed Tyler up the stairs to the office. I couldn’t wait to share the story with Tyler’s Mom!

Why would this simple exchange warrant such a reaction? Two years before, Tyler could only speak a few words. The words he did speak were difficult to understand and often had no reference to what was happening in the environment. He also spent most of his time ritualistically playing with plastic toy horses and helicopters, ignoring much of what was happening around him. Tyler, a lean blonde-headed 8 year-old-boy with a special sparkle in his eye and non-verbal Autism, had made a 5 word phrase that could be understood and acted on. And, he did it without a toy horse or helicopter in his hand. Success!

What happened to help Tyler to make this change? The answer is the NOIT.

NOIT Research is a private, leading edge Autism organization. Our purpose is the development of strategies that will support even the most severely Autistic individuals to learn to participate fully in life.

A small percentage of the Autistic population, possibly 10 to 15%, are so severely handicapped with Autism that the development of language skills does not occur.  The failure to develop language is a good indication of just how severely they are affected. Along with the failure to develop language, many of these individuals are also severely limited in the areas of  self-care, social and emotional function, and focus and attention. Almost all exhibit ritualistic  or repetitive behaviors (often called stims) or engage in self injury.

This limited population of autistic individuals is the focus of NOIT Research.

Ronald D. Davis was labeled a “Kanner’s Baby” as an infant. His desire to help others like himself led him to spend the past 30 years exploring unique and medication free strategies to assist those affected by Autism. After successfully creating the Davis Autism Approach® Program, it was recognized that a portion of the clients it was created for were unable to use the tools and strategies that are the foundation of that program. Therefore, a unit called the NOIT was created to fill that void. The word NOIT is an acronym for Natural Orientation Inducing Tool. Its purpose is to support the Autistic individual while they learn the tools necessary to proceed.

NOIT is an acronym for Natural Orientation Inducing Tool.

The function of the NOIT is to support an individual while they learn to establish a stable orientation. It cannot cause this directly, but by putting a auditory stimulus in the exact same place at frequent intervals (every eight seconds) for long periods of time, the person learns to keep their attention in one place. By keeping their attention in one place, they are able to accurately perceive the world around them from this place. When they can do this, we say that the person is “oriented”. Once the person can create and maintain an oriented condition, very quickly all of their perceptions will be functioning in harmony. This in turn removes the chaos from the environment and allows the person to function from a single perspective.

For whatever reason, individuals with non-verbal autism didn’t create their own natural orientation. Because it didn’t fully occur, the individual is left unable to control their perception of the environment.The result is that the individual lives in a constant state of sensory overload or devises strategies to manage this overload themselves. This gives rise to many of the common characteristics we see in non-verbal autistic individuals. By learning to achieve an oriented state, they are able to perceive their environment much like the rest of us. This naturally leads to a lessening of behaviors characteristic of autism and allows the individual to spend more time learning how to interact appropriately.

Just over 2 years ago, Tyler became the first NOIT user. His success allowed others to follow. To date, 16 non-verbal autistic individuals have used the NOIT. They ranged in age from 6 to 41. They wore the NOIT between 6 and 12 hours per day for 4 to 6 months. All of their caregivers reported significant changes which indicated that these individuals learned to perceive their environments more accurately and were more able to take in the information around them. These changes included significant gains in focus and attention, sense of self, gross motor skills, social interaction skills, and language. Language improvement included better pronunciation and appropriate use of existing language as well as emergence of new language. One very successful individual was able to learn to speak recognizable individual words within three days, names of family members within a week, and three word phrases within three weeks. Importantly, all caregivers reported less sensory sensitivity, obsessive and ritualistic behaviors (stims), and self-injury.

Here are some stories shared with NOIT Research as families tried it:

The first story is about a boy who didn’t say much of anything when he began using the NOIT. Early in his use of the NOIT trial he learned to say “Mummy” clearly and has been using it appropriately ever since. His Facilitator was recently visiting the family and the son had interrupted several times to show his Mom things or to get her attention. Yet again, he burst into the living room excited to tell his Mom something. He said, “Mommy!” She said, “Just a minute. I’m talking.” He said, “Mommy! Mommy!”  This pattern repeated itself several times until the Mom said to her son, “Would you please be quiet!” The Mom and Facilitator looked at each other and the Mom said laughing, “Be careful what you wish for!”

Changes occur as the NOIT user begins to learn to perceive their environment from one perspective with the senses working in harmony. The chaos is lessened. This leads to much calmer times for the autistic individual and the families. One Mom reported a typical day: “We went out to lunch to his favourite organic café and it was really busy as the weather was lovely – usually he would be visibly stressed with the noise and blenders and coffee machine going – there were even a couple of kids running around squealing – yet he remained happy and calm, didn’t react with stim behaviors, and enjoyed the whole process”. This enjoyment was impossible before the NOIT.

There are wonderful therapists and professionals working with many of the NOIT users. Their winning attitudes were noted clearly in the comments that the families sent. One NOIT user went through the phase of use that we like to call “the terrible two’s”. He was acting out aggressively with everyone, including a therapist who had worked with him for a long time. One day he slapped the therapist hard on her arms and then tried to bite her because he didn’t want to do the activity. True to form, the positive thinking therapist told his Mom that she’d noticed that his gross motor skills were faster!

NOIT units are currently available only through a licensed Davis Autism Approach Facilitator. You can find one directly at www.davisautism.com or contact NOIT Research at www.noitresearch.org for more information.

Tyler, his sister, Ashley, and Baxter, the office mascot 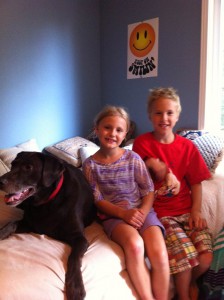 The Oswald Family on a recent family vacation. In the past, Tyler’s parents had to monitor him constantly because he wandered away from them with no recognition of danger. Now, with his newfound perception of his environment, he is less likely to wander away and more likely to agree to come back even when something catches his eye. 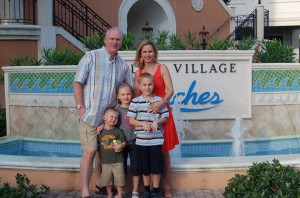 Tyler working with his Davis Autism Approach Facilitator, Ray Davis. On the table is a model of “consequence” which is defined as “something that happens as a result of something else”. They have built a model of Tyler poking a balloon and it becoming a bunch of pieces. This process allows Tyler to develop an understanding how the world works and how he fits into it. 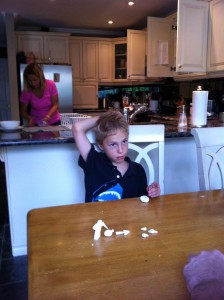